Cats are independent creatures, and it’s one of the many reasons we love them for. They do their own thing without caring who’s watching, even if it’s the one who’s actually feeding them.

That being said, finding your cat staring aimlessly is definitely odd, especially since cats don’t have career choices to ponder or overdue bills to pay. So, if you’re a responsible owner, it makes sense for you to be asking: why is my cat staring at the wall constantly or at nothing?

We’re going to go ahead and consider you to be one right off the bat. We’ll tell you that there are two possible scenarios for your cat’s behavior. One scenario shows how your cat may be superior to humans even in something as boring as staring at a wall, while the other suggests the need for a quick trip to the vet.

Why Does My Cat Just Sit And Stare At Nothing

As members of the feline species, cats are meant to be predators. This is why they generally tend to have sharp senses that tell them more about what’s around them than we can ever imagine. So, sometimes a cat just needs to stand next to a wall and stare. 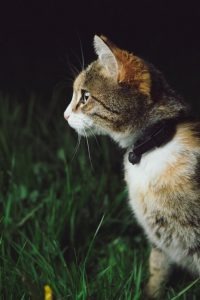 It’s no secret that cats don’t see colors as well as humans; however, this does not mean that their eyesight is inferior to humans, quite the opposite actually. A study by Live Science found that cats are able to perceive light waves like ultraviolet rays, which are invisible to the human eye.

Cats also have double the number of rod cells in their retinae than humans, which allow them to see clearly in the dark. This means that a seemingly uninteresting and empty wall to you could actually possess a myriad of things for your cat to inspect: a minuscule insect slowly making its way, or sunlight reflecting off a speck of dust, for example.

[Related Article: Shocking Truth Whether Dogs And Cats Are Color Blind Or Not]

Or Hearing Something Beyond Your Power

Along with superhuman eyesight, cats also have superior hearing that lets them detect sounds on frequencies too high-pitched for humans, and even dogs, to hear. According to Animal Planet, a cat’s ear works pretty much like a live radar to the extent that it can accurately pinpoint a sound coming from 3 feet away.

Yes, this means that when your cat is staring into space, he can actually be listening to a roach or a rodent moving in the pipes of the room across yours. It also means that if you’re looking for an animal to alarm and protect you from midnight burglaries, a cat might be a better choice than a dog. Might as well let someone else get scratched and bitten for a change, right?

They Have A Predator’s DNA

Cats’ predatory DNA means that they have a natural tendency to stalk their prey. So, if a cat finds something interesting, he might choose to observe it for a long time before pouncing in the air, or just forgetting about it and moving on as these lovable creatures always do.

[Related Article: Why Does My Cat Scratch Windows And Mirrors]

When To Be Worried

Even though your cat staring at the wall can be a sign of his physical superiority and curious mind, sometimes this can be a signal for trouble brewing in your cat’s mind.

And no, I’m not talking about the possibility of your cat talking to ghosts or taking orders from the mothership. In that case, you know as long as you keep providing food and shelter you’ll be just fine.

Unfortunately, if it’s accompanied by other symptoms, this can mean that your cat suffers from neurological problems. The precise cause of hyperesthesia syndrome is still not clear, but doctors agree that it leads to neurological damage, which causes frenzied and self-destructive behavior. If your cat stops to stare at a wall before or in between manic seizures, this can be a sign of hyperesthesia.

Symptoms of self-destructive behavior include:

If your cat alternates between these symptoms and moments of idle staring, then you need to take him to a vet immediately.

Having an unbalanced diet can also lead to neurological problems for cats. So, if yours displays any of the abovementioned symptoms, you should also check with an animal nutritionist.

To be clear, head pressing differs from head butting, which is the innocuous act of a cat mildly butting his head against your palm, face, or even a wall. This is perfectly natural and is actually a cat’s way of expressing affection and asking for it.

Head pressing, however, is when a cat presses his head against a wall and keeps on pressing until he gets dizzy and falls. This is not a sign of extreme affection for the wall, but rather of a medical condition.

Intoxication here can mean the consumption of alcohol or cannabis. It can also mean being exposed to toxins that can be found in certain cheap medications.

Regardless of the reason, if you see your cat staring at the wall by vehemently pressing his head against it, then it’s best not to panic, and take him to the vet immediately. Many cases of head pressing can now be treated without any long-term consequences. Much like us muggles, cats also suffer from growing old and are prone to developing dementia. Cats with dementia are generally found to be disoriented and confused. This can lead a cat to stare at a wall aimlessly, and without his signature curiosity.

The main symptom for dementia is of course the cat’s age: Cats aged 17 and up have a 40% chance of developing dementia. General lack of activity and rediscovery of toilet training problems are also signs of dementia.

Although there is no clear-cut treatment for dementia, a vet can tell you about several things that can help your cat have a sense of familiarity and slow down the progression of the illness.

[Related Article: 12 Great Tips You Must Know To Train Your Cat Like A Dog]

Cats will always exhibit behaviors that can amuse us at times and scare us at others; it’s what they do. However, the next time you find your cat staring at the wall, we hope you won’t be worried.

As long as he has regular visits to the vet, a healthy diet, and plenty of affection, your favorite pet will live a long and happy life. Most of which will be dedicated to showing you who’s really the master of the house!