While petting your beloved cat, you might notice that your cat’s ear is slightly warmer than average. This might drive you to wonder “are cats ears supposed to be warm?”

In addition to hearing, cats rely on their ears to regulate their body temperature. For that reason, they can be slightly warmer than average. However, excessive warm ears can be a sign of a fever or adverse health conditions.

In today’s article, we’ll walk you through a brief guide that answers this question, so you can figure out whether it’s something serious or not.

If you want to know more about the reasons behind warm cat ears, signs of illness, and how to tell the difference, keep on reading this article!

Are Cats’ Ears Supposed to Be Warm? 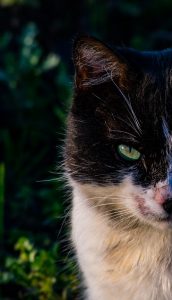 The short answer to this question is yes, cats’ ears are typically warm because they’re warm-blooded creatures that use mechanisms to regulate their temperature depending on their surroundings.

For instance, humans sweat to reduce their body temperature while dogs stick their tongues out and pant.

On the other hand, the surface of cats’ ears is exposed and thin, not covered by fat tissue or fur. This makes them the quickest point of contact with the environment, so cats dissipate heat through their ears, making them slightly warm.

For example, when the temperatures are high and the cat is feeling hot, dilation of the blood vessels around the ears will allow more blood to rush there. Thanks to the ear’s thin and exposed skin, this excess heat gets released from the cat’s body.

In fact, cats also dissipate heat through their noses for the same reasons. Yet, the majority of heat is regulated through ears because of their larger surface area.

[Related Article: What Does Cat Scientist Have To Say About Cats Kneading]

What Is the Normal Body Temperature of Cats?

The standard body temperature of a normal healthy cat should range between 100.5 to 102.5 degrees F (38.1 to 39.2 degrees C), which is slightly higher than a human’s body temperature.

Since the cat’s ear is one of the most reliable zones when it comes to heat production in cats, they’re used to measure the cat’s temperature.

To do that, you should start by cleaning the thermometer properly with a swab of alcohol. You can use either digital or mercury thermometers, although pet-specific digital ones are recommended because they’re quicker, so they don’t annoy your cat.

See also  Cats And Cucumbers: Why Are Cats So Afraid of Them?

Once the thermometer is ready, hold it horizontally and insert it into any of the cat’s ears. Make sure to keep it still until it gives out a reading, usually by making continuous beeps. When it’s time, take the thermometer out and record the temperature.

What Does a Slightly Warmer Than Usual Ears Indicate? Although it’s perfectly normal for cats’ ears to be warm to the touch, you might suspect that they’re slightly warmer than usual. In that case, you need to check their temperature to confirm your doubts.

Ideally, when cats’ ears are slightly warmer than usual, it’s usually an indication of a specific illness or other physiological reactions to the environment.

Here’s a quick look at some of the most common reasons why your cat’s ears are noticeably warm:

Although cats have some sweat glands around their paw pads, these aren’t enough to produce enough sweat to regulate their temperature or cool them down on hot summer days.

When cats’ body temperature starts to elevate due to overheating, the extra warm air will rush to their ears so that the extra heat is dissipated.

In most cases, this shouldn’t be a concern because no other complications or symptoms will occur if the cats successfully cool themselves down.

However, if the cat isn’t able to cool itself down due to extreme temperatures, things could develop into a “heat stroke”. Among the most common signs of heat strokes are:

Another reason that shouldn’t be a reason of concern is that like us, a cat’s temperature will fluctuate due to emotional and physiological changes.

For example, after some playtime and exercise, you should expect your cat’s ears to be slightly warmer than average.

This also applies to certain emotions, such as over-excitement, anxiety, or even anger. Once these emotions are gone, the ears should be normally warm again.

Like humans and other animals, cats are prone to fever due to pyrogens found in microbes, such as bacteria, viruses, and fungi

In addition to microbes, certain diseases and immune responses to medications can also result in a fever, which causes the general elevation of the cat’s temperature, causing their ears to be much warmer than usual.

A feverish cat will also show various other symptoms, such as dehydration and panting with a noticeable tendency to rest due to rapid heart rate and lethargy. Moreover, some cats will abandon grooming during that time, showing knots and mats.

See also  How Do Cats Show Affection To Their Owners

Another major reason behind hot ears is an allergic reaction. In that case, the elevation in temperature is usually accompanied by noticeable redness in the ear.

Unlike humans where most allergy symptoms are concentrated on respiratory symptoms, an allergic reaction in cats will also cause significant vasodilation in the blood vessels around the ears, which causes the ear’s temperature to rise.

Allergic reactions are usually caused when a cat consumes food that contains allergens. But, they can also be caused due to insect bites, pollen grains, and more.

Cats suffering from an allergic reaction will also have an itchy ear, so you’ll notice that the cat is constantly scratching its head either by its legs or by rubbing it against rough carpets.

In addition to bacterial and fungal infections that may cause a fever, some infections will specifically target the cat’s ear and raise its temperature level. One of the most popular ear infections to cause is ear mites.

These contagious and parasitic insects will crawl into your pet’s ears to seek shelter and feed on loose skin inside the ears, causing serious inflammation that raises the surface temperature of the ears. Luckily, they’re easily treatable by vets.

Lastly, some hormones in the cat’s body are also responsible for raising the body temperature. The most common one is the thyroid hormone.

In some cases, especially tumors, cats produce more thyroid hormone than they should, which is known as hyperthyroidism.

This is considered a serious medical condition that requires treatment due to its severe complications, including heart failure.

[Related Article: 4 Cute Reasons Why Cats Bite You For No Reason!!]

What Should You Do When Your Cat’s Ears Are Getting Warm?

Although slightly warm ears shouldn’t be something to worry about, excessively hot ears cause serious complications, such as lethargy, seizures, collapsing, or even comas.

For that reason, it’s essential that you know how to help your cat if it shows signs of a warm ear before the situation develops. Here’s what you can do to help your cat:

As previously mentioned, cats have a decently wide range of body temperatures that are considered okay.

If the ears feel warm but the cat doesn’t show any other signs of overheating, it would be better to measure the temperature first to confirm that it’s within a healthy range.

Check Other Parts of the Body

If you don’t have a thermometer in hand, you can also check other parts of the cat’s body where fur and fat tissue are thin, such as the belly, to see if they also feel warmer than usual.

This can also help in the case of allergy, where you might find signs of redness and rash scattered around the body.

The ideal temperature range for a cat is between 70 to 77 degrees F (20 to 25 degrees C). If the room’s temperature is high, cool it down by opening the windows or using the fans or AC.

Cats aren’t huge fans of water bowls and they often drink very little water every day. This causes them to dehydrate and feel hotter than usual.

Remind your cat to drink water by filling up their bowls in front of them or get an automatic water fountain because they prefer drinking from a running source of water.

If the cat shows serious signs of illness or its temperature isn’t falling down with conventional methods, you should seek a professional’s help immediately to diagnose and treat your feline friend.

[Related Article: When Cats Purr What Does It Mean]

This wraps it up for today’s guide that answers the popular question “are cat ears supposed to be warm?”.

As you can see, cats use their ears for more than just hearing, and their ears can get slightly warmer as they try to dissipate the heat and lower their body temperature.

However, if the temperature is noticeably higher than what you’re used to, always be on the lookout for additional symptoms that could be an indication of an underlying health condition, such as fever, allergies, heat strokes, and other diseases.

If you suspect an abnormally warm ear, you must take your cat to the vet clinic immediately to receive proper medical care.